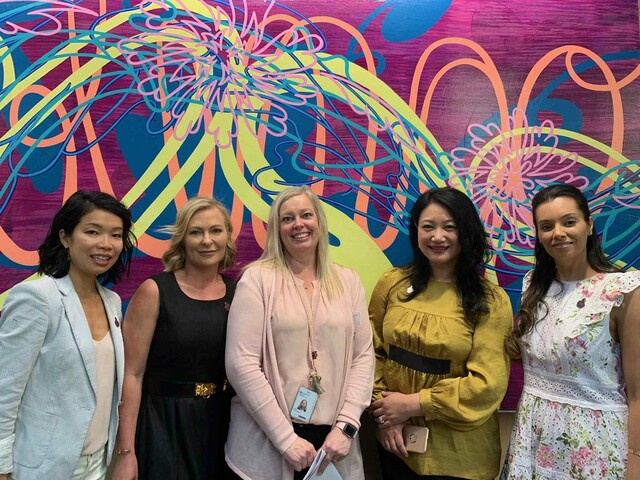 Women now have access to an enhanced treatment for certain gynecological cancers with a new state-of-the-art attachment to the da Vinci surgical robot at the Royal Alexandra Hospital’s Lois Hole Hospital for Women.

Firefly, a fluorescence imaging upgrade to the da Vinci Surgical System, can be used to treat some women with primarily early stage cancers of the cervix and uterus.

Firefly uses a dye that lights up when using a specialized fluoroscopic camera. This enables surgeons to better view cancerous tumours and the lymph nodes in closest proximity to the tumour, which are at greatest risk of becoming cancerous. The Firefly also illuminates the flow of blood and lymphatic fluid that can carry cancerous cells. With this new technology, surgeons have an improved ability to remove the tumour and surrounding lymph nodes most at risk of being cancerous, while leaving more healthy tissue untouched.

“The addition of the Firefly allows surgeons to reduce the number of lymph nodes to remove, which results in less invasive procedures, faster recovery times and, ultimately, less pain and discomfort for patients,” says Dr. Helen Steed, gynecological oncology surgeon at the Lois Hole Hospital for Women.

“This enhancement is significant for patient recovery and outcomes.”

Annually, more than 1,000 patients at the hospital are diagnosed with some form of gynecological cancer. Last year, 800 of those patients required surgery and more than half qualified for a minimally invasive da Vinci Surgical System procedure.

Firefly is expected to be used in about every four or five procedures using the da Vinci system, which enables surgeons to perform delicate and complex operations through a few small incisions with robotic-assisted surgery. Benefits of robotic minimally-invasive surgery include smaller incisions, less blood loss, less postoperative pain, and shorter hospital stays.

The Lois Hole Hospital for Women is the only centre in western Canada using the Firefly for gynecologic oncology surgery. Since first being used last March, the innovative technology has been used weekly for a total of 70 women to date. The $250,000 Firefly was fully funded by the Royal Alexandra Hospital Foundation’s Lois Hole Women’s Society, which was launched in 2017 by the foundation to create a network of women to support excellence in patient care at the Lois Hole Hospital for Women.

As the Vice President and Chief Operating Officer of the Royal Alexandra Hospital Foundation, and a founding member of the Lois Hole Women’s Society, Sharlene Rutherford knows what it feels like to be a grateful fundraiser but, recently, she also joined the growing number of women who are grateful patients of donor-funded equipment.

Signs of cervical cancer were caught following a routine exam by her family physician last October. Following a procedure to remove the cancer in January, Rutherford learned there were cancer cells in the cervical canal, as well as the potential risk of cancer in a lymph node.

In March, Rutherford received a full hysterectomy using the newly purchased Firefly and is now cancer-free.

"I am proud of my work as a fundraiser for the da Vinci robotic surgical system at the LHHW, and it’s been immensely gratifying to see the robot continue to evolve its technology and surgical prowess because of the Lois Hole Hospital Women’s society,” says Rutherford.

“The goal has always been to improve women’s health and outcomes for patients diagnosed with gynecological cancers at the Lois Hole Hospital for Women,” says Rutherford. “I never thought I might be one of those women but I am so grateful the technology and expertise were available when I needed it.”

“The Lois Hole Women’s Society’s inaugural fundraising endeavour is already making a profound impact on the lives of women impacted by cancer across our province,” says Dr. Yiu. “Thanks to a strong partnership with the Royal Alexandra Hospital Foundation, our staff and physicians can continue to provide Albertans access to the most advanced gynecological oncologic care in Canada.”